Kicking my Blending into High Gear 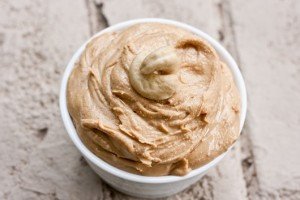 I recently moved to Canada after 10 years abroad and I decided that my welcome home present to myself was going to be a sweet, sweet blender. Then, I could kick my green smoothie, hummus and other assorted blending operations into high gear.

I had my eyes on a Vitamix for years, but they’re just too expensive in Canada. I eventually decided on an Oyster Versa, a cheaper Vitamix knock-off that had some really good reviews on Amazon.

Anyway, the moral of this whole story is that now that I have myself a sweet new blender, it’s time to experiment and start making stuff that I’d normally buy. Today, it was all about the cashew butter, a delicious alternative to peanut butter.

Not being one for recipes, I thought I’d just give it a go and experiment a bit for myself. I threw a bunch of roasted cashews, a couple tablespoons of vegetable oil, and a pinch of salt into the blender. I started by using the “pulse” setting a few times, scraping down the sides with a rubber spatula as necessary. Once it was mostly chopped up, I turned the blender on low and that’s when the magic really started to happen. The oils started to come out and it really started to look like nut butter. I kept blending, and scraping, and blending, increasing the speed from low to medium to high. I did this for about 5 minutes until the cashew butter was smooth.

2. Blend on low—>medium—>high for about 5 minutes. Scrape down the sides periodically.

3. Put in an airtight container and store in the fridge.

How to Make This Awesome Happen for Yourself

a real blender. Having used the cheap ones for years, I didn’t think they were that bad. That was until I got myself a badass one. They’re the shit.

Get yourself a serious blender if you’re really into eco-friendly living and making stuff for yourself at home.  For a reasonably priced alternative to the Vitamix that still works really well, get yourself an Oyster Versa on Amazon.

Tip #2: Use unsalted, roasted cashews. I think it’d be pretty gross without the roasting. Too bland. Unsalted is better so you can control the saltiness of your cashew butter yourself.

Tip #3: Be patient. Progress from pulsing to low speed, to medium, to high. Keep blending for at least a few minutes to make it extra creamy. For crunchy, simply add a few whole cashews in at the end and only blend for a few seconds.

Tip #4: Experiment! This basic recipe and method will probably work for just about any nut. You could also try adding some cocoa or Nutella for chocolate, or maple syrup if you want something a bit sweeter.

Tip #5: Homemade Cashew Butter = So easy! Give it a go and get yourself some healthy, delicious, frugal awesome in your life.