Forks Over Knives: Be Careful!

If you don’t want to be inspired to make some serious changes to your eating habits, then don’t watch Forks Over Knives. It’s hard for me to see how anyone could finish watching this documentary and think that eating animal protein is preferred, or even necessary at all. It’s an inspiring, thought-provoking look at the food we eat and how it’s making us sick. The best part is that if features real doctors, who are in the trenches dealing with this kind of thing each and every single day and are seeing big changes in their patients by changing their diets.

The Problem in Developed Countries

Americans, and people in other developed countries are becoming increasingly sicker, despite some of the most advanced medical care possible. 2/3 of us are obese. Cancer of all kinds is on the rise. Type 2 diabetes cases are exploding, even in children. 1/2 of Americans take at least one prescription drug.  And why are governments in developing countries propping up industries such as dairy and meat that produce such unhealthy food?

The movie follows two doctors on separate, but intertwining paths as they end up reaching the came conclusion: consuming animals and animal products is making us sick. Food has the potential to help, or harm. Food can heal us if we consume the right things, namely less animal products, less processed food, and more natural things that come straight from the ground.

My Own Reaction to Forks Over Knives

As for my own thoughts on Forks over Knives, I watched it at a time when I was already moving towards almost entirely vegan eating. I haven’t cooked meat at my house for 10 years, have used animal products sparingly and will usually choose a non-animal based alternative when eating out if possible. So, there wasn’t much that I didn’t already believe. But, it did serve as a good reminder that food is indeed medicine. It has the potential to heal even the very, very sick. The stories of regular people making some big changes were inspiring.

I credit most of my success in reducing the amount of animal products I eat to green smoothies. I’ve been eating them for 10-15 meals a week for the past five years. See: Why I Love Green Smoothies for some inspiration.

Who Should Watch Forks Over Knives

I give it a solid two thumbs up and recommend that just about every single person on this Earth watch it! If you’re already vegan or vegetarian, it will confirm what you already believe and give you some encouragement along your path. If you’re a serious meat-lover, also check it out but with an open mind. You will probably disagree, but isn’t life all about trying to understand the other side of things?

Get Forks Over Knives on Amazon 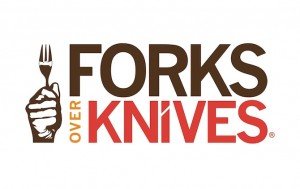